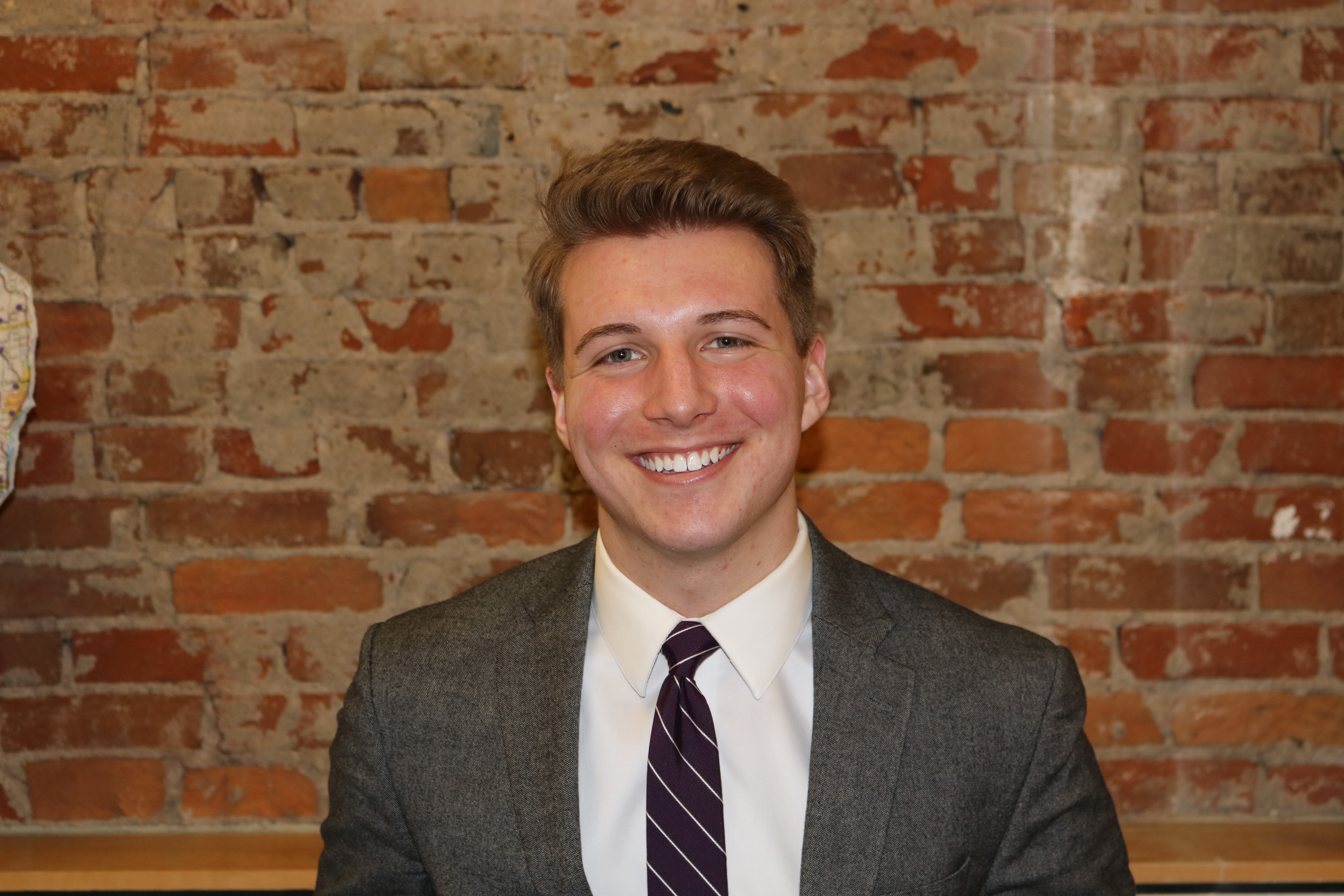 Hi there! My name is Rob and I am one of the Field Directors for Marsy’s Law for Iowa. I will be working in the eastern part of the state – including areas like Cedar Rapids, the Quad Cities, Waterloo, Dubuque, Burlington and everywhere in between.

After graduating from Grinnell College in 2018 with a degree in Psychology and Policy Studies, I worked on an Iowa Congressional campaign. Seeing the strategic planning in the office and having direct contact with voters was a great learning experience. 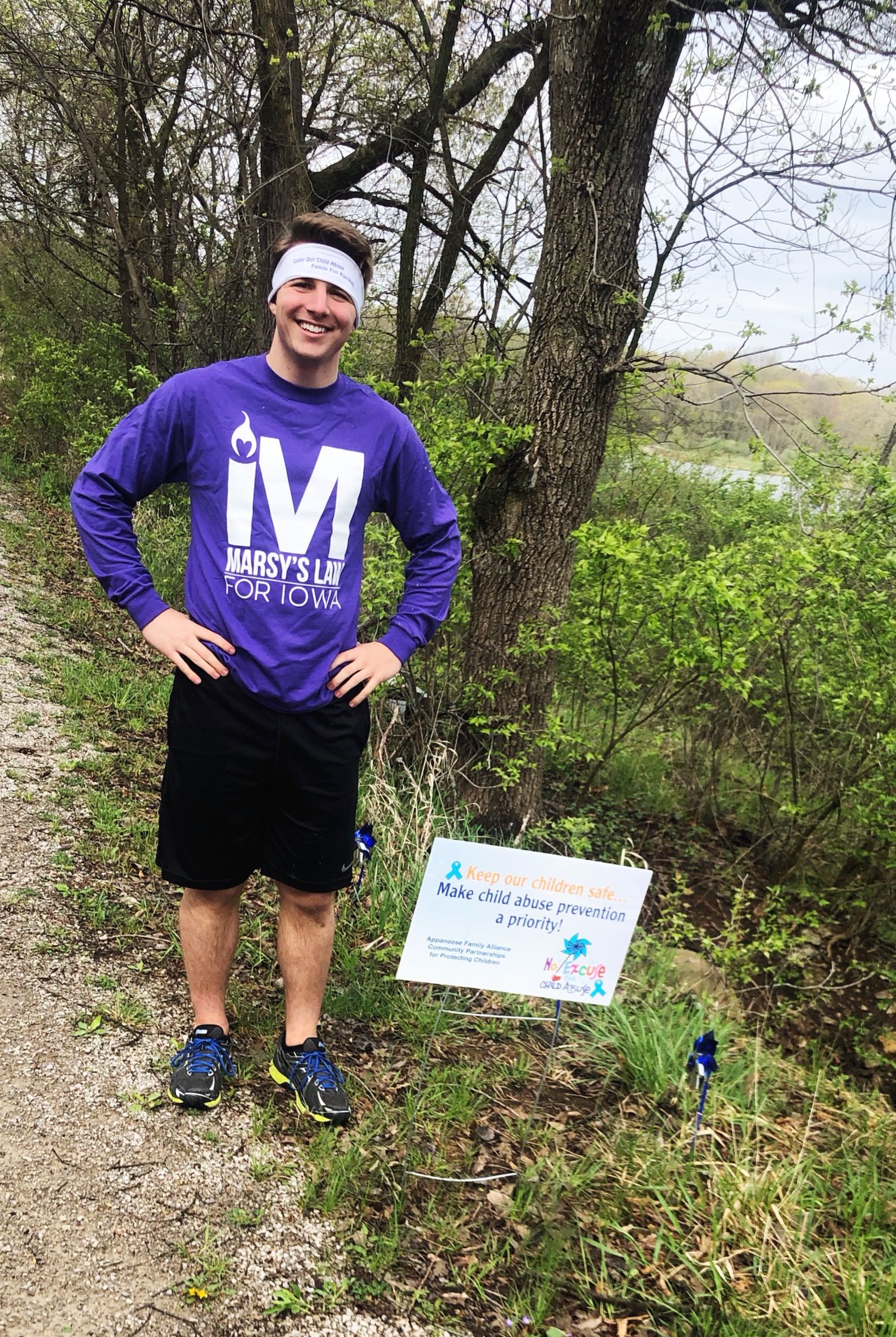 My long-term goals relate to public health and health equity, especially in how they relate to built environments. In addition to sharing the importance of crime victims’ rights and the need for it in Iowa, I look forward to traveling the state and learning more about rural challenges to health and ways to improve it.

I’ve been at this job for a few months now and I am having a great time sharing this important cause with Iowans all over the state. I look forward to meeting new people every day and working for constitutional rights for Iowa crime victims.

I hope to meet you soon!

You can reach me at: [email protected]

The Blythe Family continues to use their survivor voices for positive change. Dustin Blythe recently wrote the following opinion piece which ran in the Iowa Falls Times Citizen about his son, Treye. Thank you to Dustin and all of Treye's friends and family for the work they do in Treye's name. 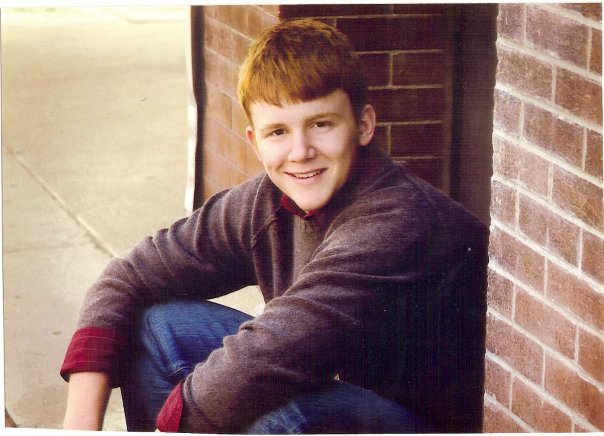 April 7 – 13 is National Crime Victims’ Rights Week across the country. This is a time to raise awareness for victims’ services and promote laws that are designed to protect and help victims of crime.

On Feb. 19 of this year, my son Treye would have turned 31. Instead, his life was cut short in 2006 when he was 18 years old. Treye was murdered in Cedar Falls coming to the aid of someone he barely knew.

Treye’s family and friends woke up to our worst nightmare. On top of it all, we were thrust into a system where the scales are tipped in favor of the accused. Because of this experience, I know how important it is for the justice system to treat victims and accused criminals equally, which is why I support constitutional rights for crime victims.

Marsy’s Law is a proposed amendment to Iowa’s constitution to give victims of crime equality in our state’s justice system. Commonsense provisions such as providing notice of all proceedings; allowing victims to be present at trial; to be present and heard in any proceeding involving a release, sentencing or parole; notice of any release or escape of the defendant and the right to restitution. These things were not always afforded to our family as we navigated the justice system.

Our constitution specifies rights for the accused—things like the right to remain silent or the right to an attorney. Yet rights are not outlined for victims, and they need to be.

I would never wish for anyone to experience what our family and friends have gone through. This National Crime Victims’ Rights Week, and every week, we must recognize that Iowa crime victims are innocent and deserve basic protections in our state’s constitution.

Ensure That Laws Cannot be Changed, Diminished or Ignored.

Rep. Jon Jacobsen from Council Bluffs, recently penned the following opinion piece in honor of National Crime Victims' Rights Week. Rep. Jacobsen has been a longtime supporter of our efforts and we're thankful for leaders in the Iowa Legislature like him.

Gov. Reynolds recently declared April 7 – 13 as National Crime Victims’ Rights week in Iowa. This is a time to draw attention to Iowans who have been the victim of a crime, help support them in their recovery process and shine a light on legislative policies that can help strengthen a victims’ standing.

During my time in the Iowa Legislature, I’ve worked hard to ensure that victims have a level playing field and a voice in the criminal justice process. No one asks to become the victim of a crime and it should be one of the most basic tenets of our society to protect those victims.

This is why I support giving Iowa crime victims constitutionally protected rights. 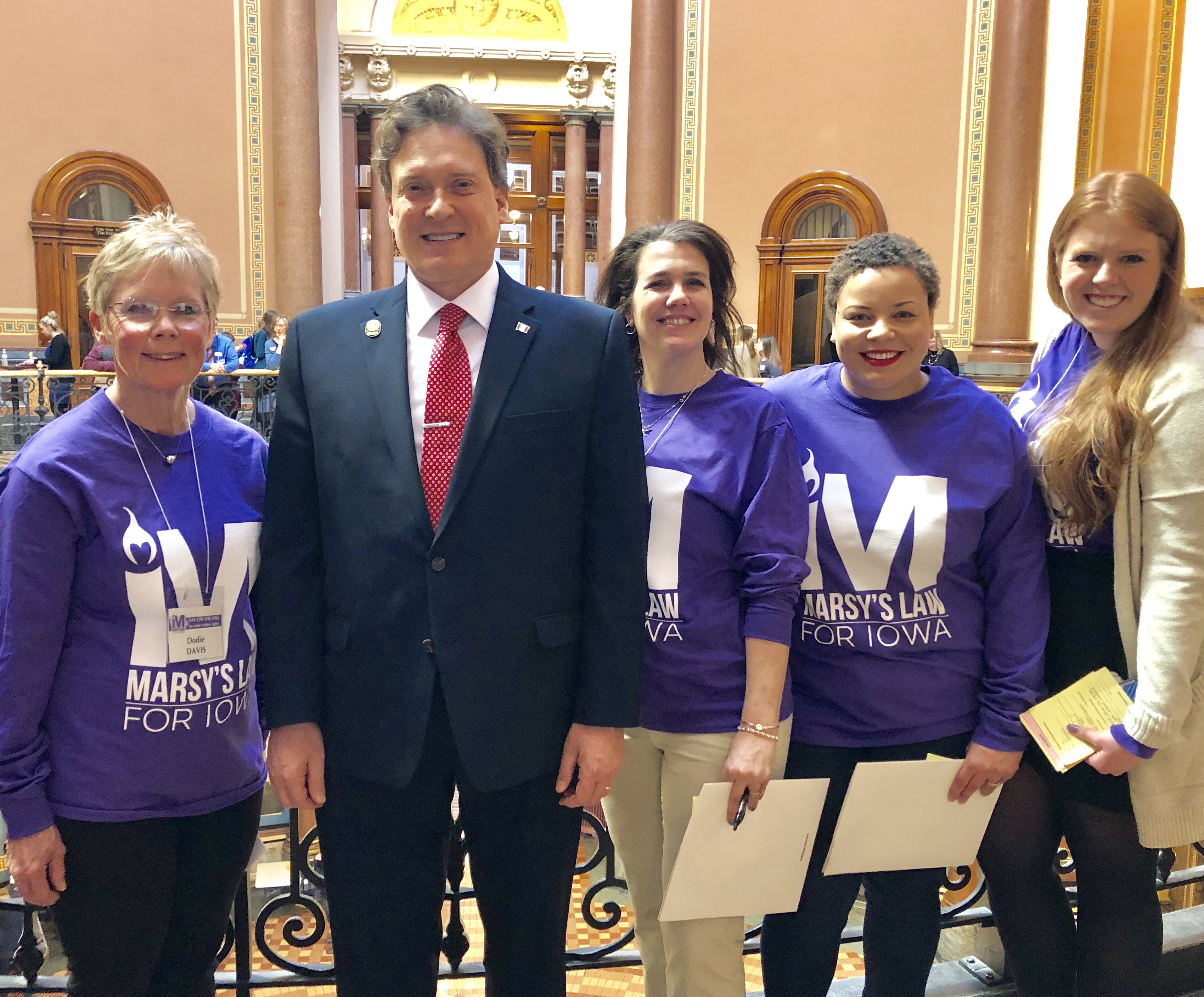 Iowa is only one of 14 states that does not have rights in our constitution to protect victims of crime. There is an ever-growing coalition of Iowans – law enforcement, locally elected officials, legislators, county attorneys, victim survivors, and others – who support a crime victims’ rights amendment in our state.

No victim should be made to feel that their rights are less than someone who perpetrated a crime against them. Putting rights for victims in our state constitution, right alongside the rights of the accused, would ensure that laws cannot be changed, diminished or ignored.

As the country celebrates National Crime Victims’ Rights Week, we should reach out to those who may be hurting or struggling after being the victim of a crime. We should also push for change and encourage policies at all levels that give a voice to the victims in our state. 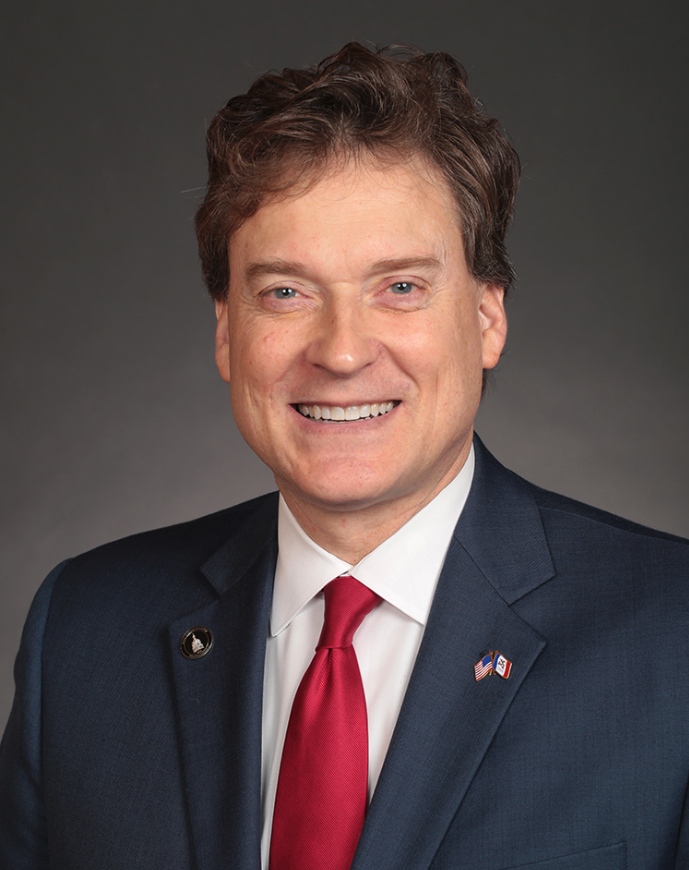 Guthrie County Sheriff Marty Arganbright has been a tremendous supporter of Marsy's Law for Iowa. In honor of this National Crime Victims' Rights Week, Sheriff Arganbright wrote the following opinion piece. Thank you for all you do for the people of Iowa and Guthrie County, Sheriff. 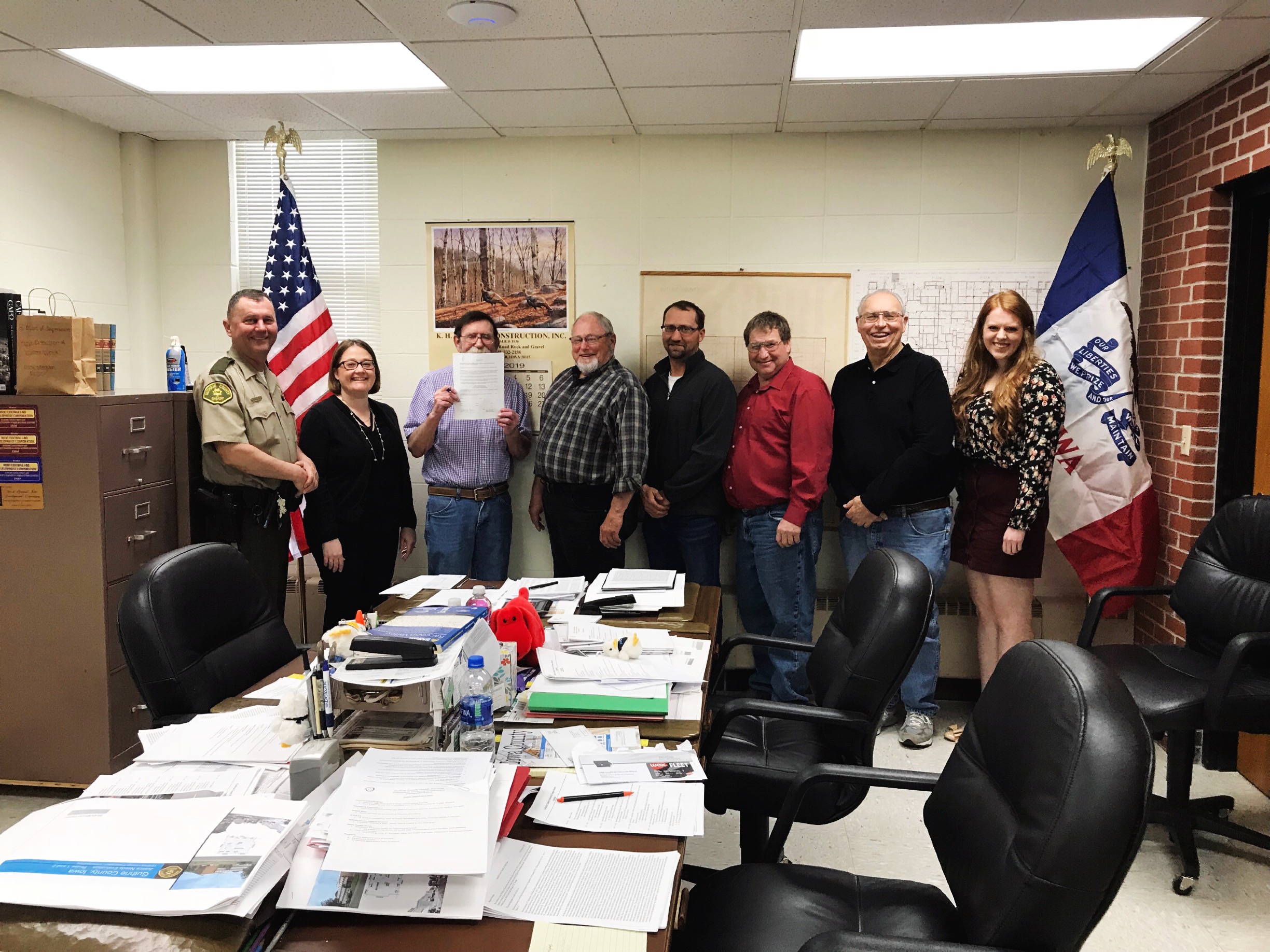 Being the Guthrie County Sheriff is a privilege that I don’t take lightly. I am reminded on a daily basis of the value of all law enforcement officials in our county and how we are the frontlines of many terrible situations.

A significant portion of my job is spent working with victims of crime and their families. Oftentimes, law enforcement is involved much deeper than simply investigating crimes. We work with crime victims and their families every day, many of which have never navigated the criminal justice system before. As we work with these individuals, we forge a connection and help to be their voice when they are not in a position to be heard. And too often, they’re not being heard.

Just statues are not good enough, victims deserve permanent rights they can count on, regardless of where they live. Victims deserve constitutional rights.

When I arrest someone, I must read them their Miranda Rights – the accused is afforded very permanent and clear rights in our state’s constitution – as they should be. But victims also deserve rights that carry the same weight. A victim should never feel like their rights are less than someone convicted of a crime against them.

Marsy’s Law would provide these constitutional rights to crime victims in Iowa. It would essentially take our good victims’ rights law and make it permanent and enforceable in our state’s constitution.

One of our Marsy's Law for Iowa supporters, Dalene, got busy writing during National Crime Victims' Rights Week and submitted this opinion piece to the Des Moines Register. 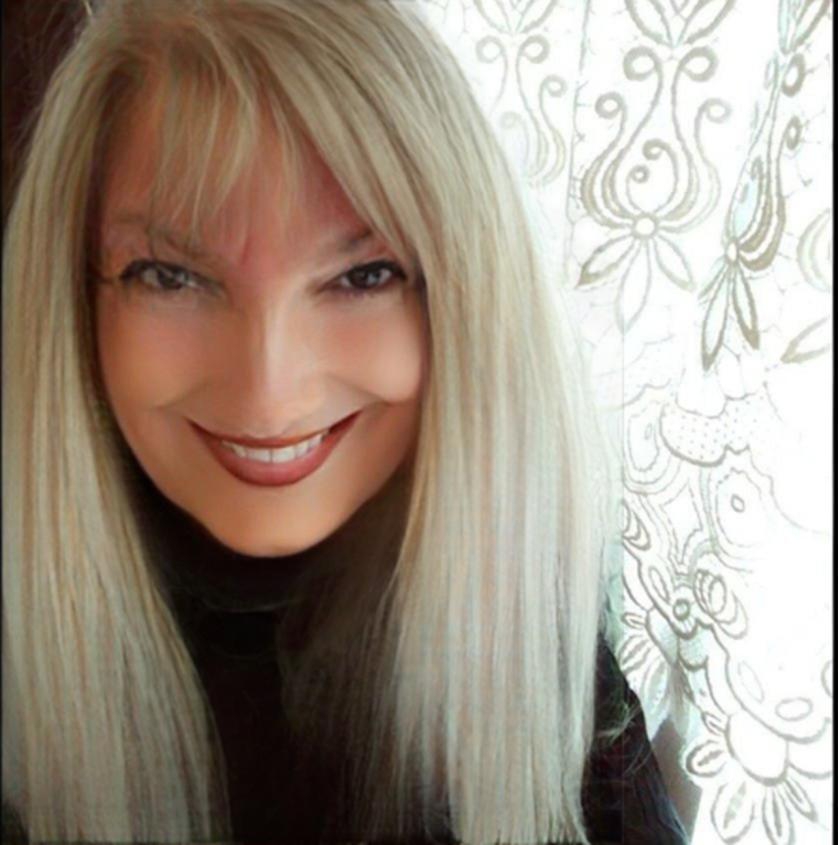 "The lack of knowledge and compassionate understanding of what it means to be a crime victim causes the victim to be re-victimized over and over again. I am no exception."

Thank you Dalene, for bravely sharing your story and using your voice. We stand with you.

You can read the full submission below:

According to US News & World Report, Iowa is the best state in the nation. The findings, based on eight categories, are something of which every Iowan should be proud. Numbers help to judge our progress or our stagnation.

One of the lesser impressive rankings for our state is that we are only one of 14 states that does not currently have victims’ rights enshrined in our state constitution. We can ensure this happens by passing Marsy’s Law – a victims’ bill of rights for our constitution.

On May 17, 2012, my husband was shot to death in the parking lot of his workplace in Des Moines, as was his co-worker. The now-nearing seven years has been a trial not with a jury of 12, but a jury of all who have no idea what it is the victim goes through following such an ordeal. The lack of knowledge and compassionate understanding of what it means to be a crime victim causes the victim to be revictimized over and over again, and I am no exception, as are countless others.

Crime Victim advocates do everything in their power to help, up to their boundary limits. The courts do what they can by issuing compensation in word only – compensation is not restitution. Compensation is what is paid to the surviving victim from the perpetrator’s prison wages. In my case, my average quarterly check is $87. Needless to say, I will never see the $150,000 granted me by the judge. This is a huge misrepresentation of the definition of compensation. The system fails.

The Vine is meant to be a communication tool between the State of Iowa and surviving victims. Clearly, my understanding of The Vine was that I would be notified prior to a situation whereby the perpetrator’s status would change - appeals, parole, etc. I found out that the man who shot my husband seven times was moved to Anamosa from Ft. Madison, per his request. Efforts to get him moved back to Ft. Madison are in vain, and again, revictimizations are the end result. The system fails.

Marsy’s Law guarantees victims’ rights to be heard at hearings and proceedings, the right to protection, notice of release of the convicted, and the right to restitution.

Do you want to share your story? Send us an email at [email protected] 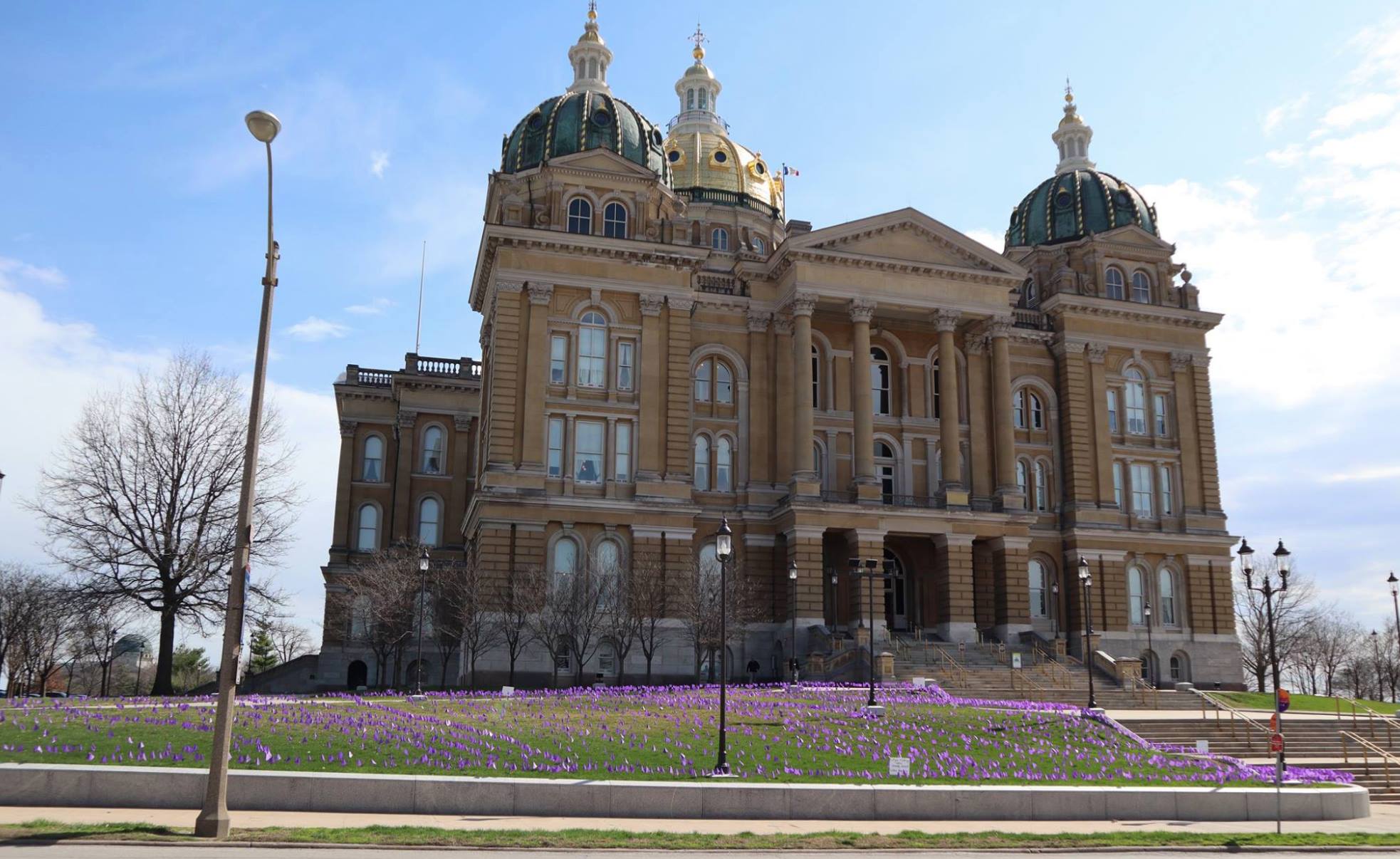 MOUNT PLEASANT, Iowa (April 9, 2019) —On Tuesday, the Henry County Board of Supervisors voted unanimously on a resolution supporting Marsy’s Law for Iowa, an effort to strengthen victims’ rights in Iowa’s Constitution.