Like most kids her age, she wanted to connect with her friends on social media. It was in this space where she was targeted, groomed and eventually lured to a predator’s home where she was raped at the age of 12 years old.

Most crime victims never expect something like this could happen to them. I know I didn’t. Knowing what I know now, I am speaking out to change the criminal justice system for future victims.

In our case, my daughter’s offender was convicted and put in prison. While the law in Iowa entitles the victim to know parole information and allows them to speak at hearings, we were never informed of such events. The parole board never got to hear from our family. They never got to hear how because of this person’s actions, my once happy daughter began cutting school, failing classes, running away from home and even having suicidal thoughts. More importantly, they never got to hear that he was still on Facebook, a clear violation and evidence that he was not rehabilitated. According to the Iowa courts, the rights of this heinous rapist were greater than my daughter’s.

Marsy’s Law would enshrine rights for crime victims in Iowa’s constitution. These provisions are nothing new to Iowa; they’re in Iowa law. But Iowa law does not go far enough and, in the eyes of the court, it is not on the same level as constitutional rights. Courts can overturn laws and they can be weakened in the blink of an eye.

The proposed permanent provisions would give crime victims:

My daughter is grown now, she received treatment and she is thriving. But for many victims, their stories do not end as happy ones. We need to do all that we can to protect Iowa’s innocent victims. It’s far past time for crime victims to have equal footing in Iowa’s constitution. 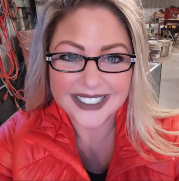